What’s coming down the pike? 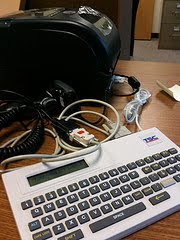 The Development Partners are hard at work preparing for their conversion to Evergreen. For some, this means some serious time in the stacks – rebarcoding with the machine pictured here (or barcoding for the first time) is on their to do lists in addition to the usual weeding and record clean-up that goes with a migration.

Bibliomation staffers are profiling the development partners and getting Evergreen 1.6 installed. Evergreen 1.6 just became available and features a beta version of the acquisitions module slated for release in version 2.0 (due out in 2010).

In December and January, we’ll be working with Equinox to get the profiling data into our production server and start testing batches of records. As the winter progresses, we’ll be developing our training and documentation (and testing it out on the development partners).
Development partners will begin to go live in early March 2010! We’ll see Evergreen in action and be able to test developments for the rest of the consortium. Our open source migration is on its way!
-Kate
+~+~+~+~+~
Kate Sheehan
Open Source Implementation Coordinator
ksheehan{at}biblio{dot}org
Posted by Bibliomation HQ Staff at 11:33 AM 3 comments:

The Connecticut Library Consortium (CLC) is sponsoring a series of presentations on open source migrations at CT libraries. In October, the University of Hartford presented on their migration to LibLime's Koha, last week the Goodwin College, in East Hartford presented on their migration to Koha, using ByWater Solutions, and next month is Bibliomation's turn to talk about our selection of Evergreen.

Here is the announcement from the CLC, just posted this morning on their listserv:

Join us for the next in CLC’s Open Source Series

“How’s it Going?” An Inside Look at Bibliomation’s Migration to Evergreen

Just 18 months ago, Bibliomation's Planning Committee, Board of Directors, and User Council made the decision to move in the direction of Open Source. Now they have decided to establish Evergreen as the preferred migration path of the network's Integrated Library System, supported by Equinox. Bibliomation's staff will discuss their impending migration with CT colleagues. Register online now!

Hooray! LibraryThing for Libraries now works with Evergreen! You can see it in action at Kent County Public Library in Maryland.

Labels: enhancements, Evergreen, librarything for libraries
Earlier this week, Amy and I went to CLA’s speed mentoring session. We met LIS students, new librarians and those considering library school. Almost every time I talked about our move to Evergreen, I was asked what open source is. It seemed like everyone had heard the term and had a vague sense of what it meant, but longed for a more concrete understanding of what all the fuss was about. After giving my (speedy) explanation a few times, I thought I should post an open source cheat sheet here for our members to refer to. For a more thorough explanation, see our Open Source FAQ (which is a Word document).

What is Open Source?
The short answer: Open source software allows anyone to see and change the underlying code.

A more complete answer: The code underlying open source software is freely available to anyone who wants to improve or modify it. The result is a community-developed product that’s more secure and stable, and offers a rich set of features.

A little more nuance: Open source software uses an open licensing structure. You know those looooong blocks of fine print that pop up when you install new software? Those are End User License Agreements, and they usually prohibit the user from modifying the software or giving it away (among other things).
Open source software, by definition, requires free redistribution and access to the source code. A complete list of criteria can be found on the Open Source Initiative’s website: http://opensource.org/docs/osd

And this is good because?
Software that is developed by a community has the advantage of having many eyes and hands looking at and working on the product. Security loopholes are spotted and closed quickly and features are developed and released regularly.

In the case of an ILS, the speed at which features are added is particularly good news for our patrons. OPAC tools and toys will be available before they’re obsolete and the library’s primary discovery tool will keep pace with the web. On the staff side, an intuitive interface and a customizable report structure are huge benefits. When one library makes an improvement to their system, that change will be made available to all libraries using the system.
No software it perfect, of course, but open source software gives users more freedom to make (or ask for) the improvements they’d like to see.

Does anyone else use open source software?
Almost everyone does, in some way, shape, or form. Firefox is an open source alternative to Internet Explorer and Open Office is an alternative to Microsoft Office. Both are successful projects with lots of users.

More popular, though, are server-side packages that are used by companies and organizations worldwide. Many websites are hosted on servers running a suite of open source software commonly called LAMP (for Linux, Apache, MySQL and PHP) and chances are, you've visited, shopped on, or worked on a site on a LAMP server.

The move to Evergreen will be a big change. Thanks to the community of open source enthusiasts, programmers, and companies, it will be a change for the better!

Don't forget to join our Evergreen discussion list - send an email to join-evergreen@biblio.org. You can also find us on Facebook!

Our open source team has been busy, creating listservs to keep our member libraries informed of our Evergreen developments.

The first list, BibliOak, will be used as a communication tool for us and our development partner libraries - The Beacon Falls Library, The Douglas Library, Hebron, The Slater Library, Griswold, and The Windham Free Library. The second list, Evergreen, will give us a vehicle to reach out to Bibliomation's 48 public libraries and 20 K-12 schools as we move forward with our Evergreen software exploration. There is a third list, created by the folks at Equinox, called "bibliomation-migration" - this list will be the primary means of our communicating back and forth with our migration team at Equinox.

Kate will also be delivering our newly acquired ITG Scan & Print system to the Beacon Falls Library so that they can update their item barcodes to 14 digits. After Beacon Falls has completed this re-barcoding process, the system will then be delivered to the Douglas Library, in Hebron, so that they can re-barcode their items in time for the March 2010 migration to Evergreen.

Today we signed the contract with Equinox, making our partnership with them official.

We also had a conference call this morning with Shae Tetterton, Equinox's Project Manager for Bibliomation. We've set up weekly migration meetings with Shae, beginning on Monday, November 30th and lasting until our development partner libraries are live on Evergreen that first week in March of 2010.

Shae will be sending us some migration profiling documents so that we can use them to develop our own, to be used with each development partner library. Shae also mentioned that Equinox can help us clean up the bibliographic and patron data if we should find any anomalies. Regarding the item barcodes, Shae will be checking to see if Evergreen can validate on their 14-digit length to avoid mis-scans getting entered into the system as the libraries are entering their holdings.

We're looking forward to working with the Equinox migration team over these next few months! 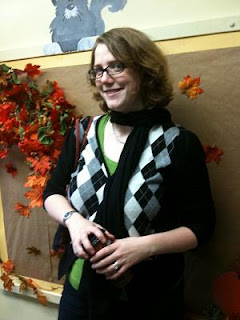 Question: What made you want to work at Bibliomation?

Answer: The [open source] project is ridiculously exciting. I started paying attention to Bibliomation's investigation of open source systems during the state library's open source system exploratory meetings with the various libraries in the state. I've also never worked for a consortium before. I really like the project and the newness of it.

Question: What is your educational background?

Answer: I have a Bachelor's in Geology from Smith College. I graduated in 2000. I received my MLIS from Simmons in January 2004.

Question: What is your work history? Which job(s) did you enjoy the most?

Answer: I worked at the Ferguson Library, in Stamford, for two years. I split my time in half between reference and IT work there. I also worked nights and weekends at UCONN Stamford during my time at Ferguson. I was responsible for IT at the Hamden Public Library. I was Coordinator of Library Automation at the Danbury Public Library for two years. I really enjoyed my time there. My last job was as Head of Reference at the Darien Public Library. I was there from March of '08 until now.

Question: How did you select Library Science?

Answer: I had a job as a research assistant at a market research firm. I liked the research part, but not the for-profit part. Both of my parents are social workers; I wanted to help people. I grew up around a helping profession. I can help people without being a therapist.

Answer: I like the principles of open source. It returns access to the data to the libraries; they have control over it, power over it, and in turn, can turn that over to the patrons. What's been interesting for me -- these are [small] libraries that right now don't have anything online for their patrons. It's clearly intuitive to the patrons what should be there. When we bring [these libraries] up, [the patrons] will recognize it, it will all be there. The libraries will go from 0 to 60, they'll be exactly where they'll need to be.

Question: What do you like to do in your free time?

Answer: I am an occasional knitter. My husband and I like to go into the City for plays and museums. I like to go to concerts -- jazz and the occasional rock show. I like to read -- my beach reading is the mystery novel. Just finished the new Thomas Cook. I really like Tana French. The Likeness and In the Woods are astoundingly good. I read a lot of non-fiction. Because I spend a lot of time in the car, I listen to a lot of books on CD. I also listen to a lot of podcasts. My favorite podcasts right now are This American Life, Grammar Girl, The Moth, and Ricky Gervais with Stephen Merchant [co-creators of the British version of The Office].

The Windham Free Library is a "virgin" (non-automated) library so they will have a barcoding project to begin soon. The other three libraries have non-standard item barcodes so we will be using the ITG Scan & Print system to generate 14-digit barcodes with unique library prefixes for each of them. The programming is almost completed on ITG's end for Beacon Falls, the first library to take on this task.

Melissa will be providing online demonstrations of the Evergreen staff client and web catalog for all four development partners the week of November 16th. Then we will be meeting with each library for all-day profiling sessions so that we can record their collection needs and circulation policies, to be programmed into their Evergreen server.

Nice to have a good plan in place!